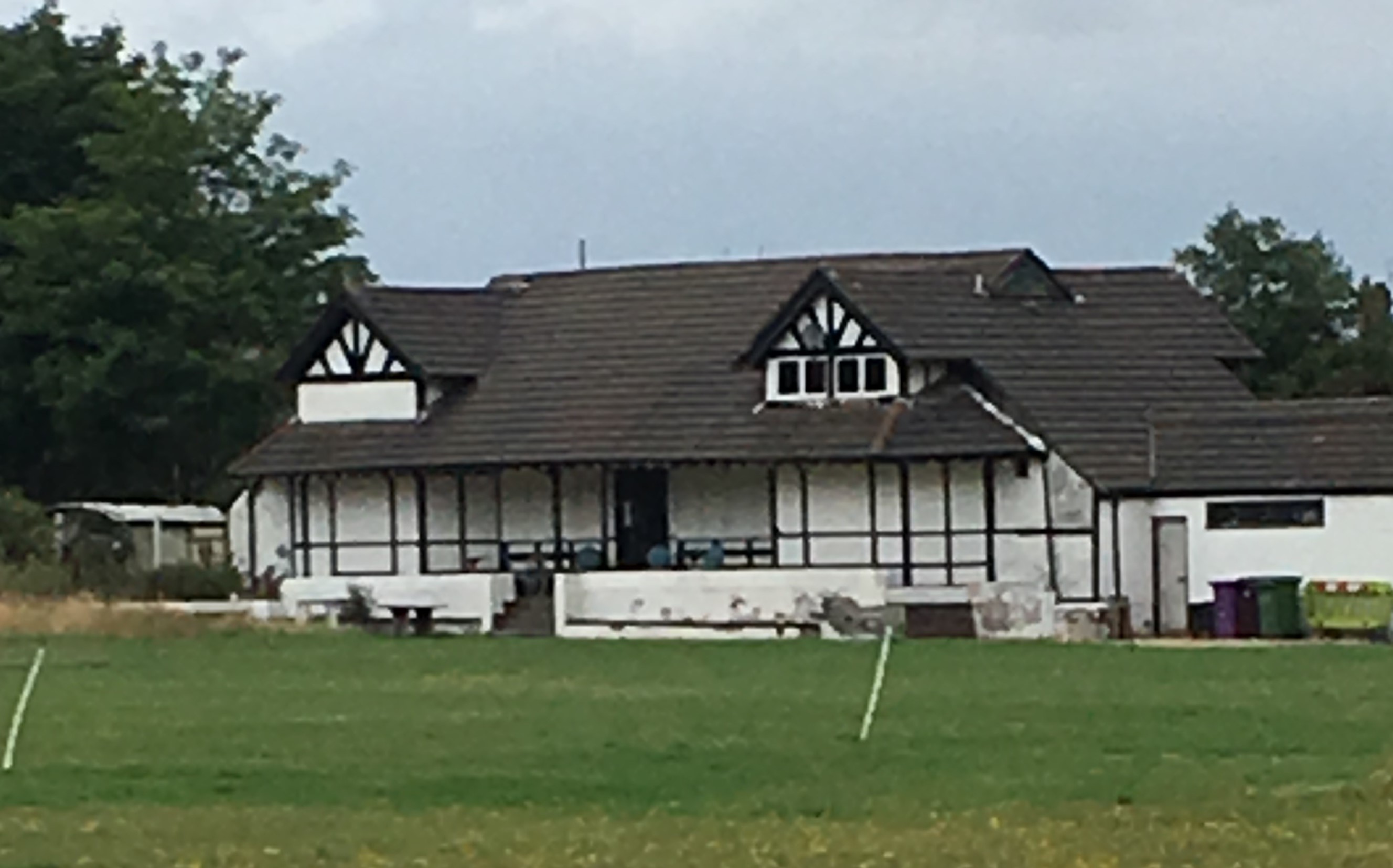 The reasons for designation and its history are as follows:

The building or site itself may lie within the boundary of more than one authority.

Cricket and bowling pavilion, 1875 for the Huyton Cricket and Bowling Club. Extended or altered before 1891. The late C20 or early C21 extension is not included in the listing.

Huyton Cricket and Bowling Club Pavilion of 1875 extended before 1891, is listed at Grade II for the following principal reasons:

Architectural interest: * as one of few pre-1914 pavilions to survive nationally;

* for its symmetrical timber-framed form, featuring mirror-image long elevations with verandas beneath the overhanging roof, and ample fenestration to observe play on both the cricket pitch and the bowling green;

* while many cricket clubs also had bowling clubs for their retired cricketers, the equal emphasis of the dual aspect design is unusual and possibly unique in pavilion design nationally and highlights the parity given to both teams at Huyton;

* the pavilion survives in substantially intact form, with much of its Vernacular Revival character remaining.

Historic interest: * a very rare example nationally of an early pavilion erected by a local cricket club, rather than being associated with a county club ground, educational establishment or public park;

* the Club was one of the eleven founding members of the premier league Liverpool Competition in 1892.

Huyton Cricket Club was formed at a meeting on 7th May 1860 under the chairmanship of Alexander Eccles, a cotton broker and Victorian sporting patron, with the Bowling section started on 18th August 1862. This subsequently led to a Cricket and Bowling Club pavilion being built in 1875. The land on which the cricket pitch and bowling green stood was owned by the Stanley family, the Earls of Derby, whose seat was Knowsley Hall. In 1892 Merseyside cricket clubs created a league called the 'Liverpool and District Cricket Competition', of which Huyton was one of the eleven de facto members at the time. As well as their amateur stalwarts, the Club managed to sign a number of professional players throughout the late C19 and early C20, including the long-standing professional Ben Barrell, signed around the outbreak of the First World War, returning after the War to play for the Club during their most successful period in the early 1920s and remaining there until his retirement. In 1935 the land was sold to Thomas Stone, continuing in use as a sports ground.

The cricket ground is located on the north-east outskirts of the village of Huyton, on the northern side of Huyton Lane. The pavilion is first shown on a plan of the village drawn in 1878 by William Wrennall for Huyton Local Board to map his sewer and drainage arrangements. Wrennall drew the pavilion as rectangular, with a smaller outshot on the north-east side. It stood between the cricket ground to the south-east and the bowling green to the north-west. The first edition 1:2500 Ordnance Survey map surveyed around 1891, published 1892, shows the labelled pavilion in the same position. At this time it is shown in its present form as a rectangular building with symmetrical and mirrored long elevations, each with two wide canted bays and a covered veranda.

Historic photographs show it as a long, half-timbered building with a railed veranda running its length, overhung by a deep, tiled roof with gabled dormers over the bay windows and cat-slides to the side elevations. The veranda had a low brick wall topped by a timber balustrade with a moulded hand rail, shaped posts with finials and horizontal boarding to its bottom half, with steps up to a central, wide doorway, diagonal steps at each end, and long timber benches to each side of the doorway. The pavilion itself had vertical tongue-and-groove boarding set in the timber framing and continuous fenestration with windows set in the timber frame with shallow segmental-arched heads and slender glazing bars with one vertical and two closely-spaced horizontal bars. Above the main windows was a band of small-pane glazing. The dormers also had rows of windows with a central clock to the right-hand dormer.

A timber First World War memorial was erected in the pavilion. Latterly it stood on an early-C20 timber mantelpiece and covered the central double doors leading onto the bowling green veranda, though its original position is not known.

Cricket continued to be played at the grounds until at least 2012, but the building has been disused for a number of years. The war memorial was recently moved to Huyton British Legion.

Cricket and bowling pavilion, 1875 for the Huyton Cricket and Bowling Club. Extended or altered before 1891. *The late C20 or early C21 extension is not of special interest and is not included in the listing.

PLAN: the single-storey pavilion is symmetrical. The rectangular building has expanded ends with the long, mirror-image, elevations having a wide, canted bay window at each end with dormers over, a central doorway and a raised veranda running their length.

EXTERIOR: the pavilion is raised on a deep, brick plinth and has a veranda running much of the length of both long elevations. The building itself is timber-framed. The timbers forming the frame are chamfered, or chamfered and stopped, with larger, moulded verticals denoting the angles of the bay windows. The timber is painted black. The panels infilling the frame beneath and above the windows are vertical tongue-and-groove boarding, a number replaced by timber sheeting, though much original infill remaining. The infill is painted white. It has a gambrel roof with deep overhanging, sprocketed eaves and set-back overlying catslide roofs to both side elevations. The roof is covered in modern concrete tiles.

The long south-east elevation faces the cricket pitch. The closely-spaced sprockets of the overhanging roof have shaped ends and the roof is supported by shaped brackets which rise from two large canted bay windows towards the outer corners and by a slender, decorative turned timber column and bracket to each side of the central doorway. The main strip of windows each side of the doorway, upper band of small-pane glazing and bay windows are boarded up; internally the original segmental-arched windows remain in the central room, those on the south-east side lacking their glazing bars. The bay windows have undergone some alteration to form single, central picture windows, but the timber frame remains and the positioning and fixing of the boarding between suggests it is likely that the original window frames survive here too (covered both externally and internally). The original band of small-pane glazing remains visible internally above the left-hand bay window. The individual outer windows beneath the catslide are also boarded up. Above each bay window is a wide gabled dormer window with barge boards and boarding to the gable apex with applied decorative timber framing over a row of square windows (boarded up). Internally, the left-hand dormer window is visible above a modern suspended ceiling* (not of special interest) and the five lights are decoratively glazed with leaded, coloured glass. The right-hand dormer window has a replacement row of four lights without the clock. The side panels of the dormers retain their tongue-and-groove boarding. The central doorway has timber double doors now (2020) covered with metal sheeting. To each side of the doorway is a fixed veranda bench. The benches have outer decorative ends with turned balusters, two wide seat planks fixed against the canted bay windows and two back rails. The veranda boarded flooring has been replaced with grooved boarding. The veranda is edged by a low brick wall, plastered and painted white. The modern extension* (not of special interest) is set back at the right-hand end.

The long, north-west elevation faces the bowling green. It is a mirror-image of the south-east elevation. The windows and the door are all boarded up; internally the central room retains the original segmental-arched timber window frames and slender vertical and horizontal glazing bars. The band of small-pane glazing is also visible above the central doorway (previously covered by the war memorial). The bay windows appear to have been similarly altered, with original window frames covered. The central doorway is boarded over externally; internally the timber double doors have inset panels of vertical boarding with chamfered and stopped edges. A narrow doorway has been inserted into the left-hand bay. There is a similar fixed bench to each side of the central doorway. The gables apexes are boarded over. The side panels of the dormers retain their tongue-and-groove boarding. The modern extension* (not of special interest) is set back at the left-hand end. The veranda is of two levels with timber boards next to the building and a lower, concrete level next to the balustrade. The veranda is edged by a low brick wall, plastered and painted white. The central steps retain timber balustrades to each side with shaped posts with diamond finials. The south-west side elevation has a low, catslide roof and a timber-framed wall, partially retaining the original tongue-and-groove infill boarding. There appears to have previously been a doorway at the right-hand end, now boarded up. The ridge gablet is boarded.

The north-east side elevation has a low, catslide roof against which the modern extension roof abuts. The ridge gablet is louvred. Most of the elevation is obscured by the extension.

* Pursuant to s.1 (5A) of the Planning (Listed Buildings and Conservation Areas) Act 1990 ("The Act") it is declared that these aforementioned features are not of special architectural or historic interest.