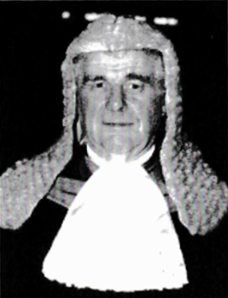 Sefton Park Cricket Club has announced the death today of His Honour John Ambrose Morgan. He was 86 years old.

John was a very able practitioner and valued friend. Unfortunately the last few years were not kind to him.

Born on 22nd September 1934, John was educated at St Edward's College in West Derby before going on to the University of Liverpool where he graduated with a Bachelor of Law degree.

Having been admitted as a solicitor in 1958, John served his National Service as a junior technician in the RAF from 1958 to 1960 during which time he spent twelve months in Hong Kong. He played cricket for the RAF and the Combined Services in 1960.

On returning home, John went into local government and later private practice before switching to the Bar in 1970 and having the great advantage of a pupillage with Bert Andrew.

John was a member of Gray's Inn, London and was a Barrister at Law from 1970 until 1990 when he was appointed a Circuit Judge sitting in Liverpool until his retirement in 2003 and sitting part time until 2009.

John joined Sefton Cricket Club as it was known then, in 1951 and made his 1st XI début in 1953. He retired in 1981 having enjoyed most of his cricket in their 2nd XI as wicket keeper with cricketers such as Charlie O'Mahony, now President of the Liverpool and District Cricket Competition, Butch Bottger and Denis Bromilow.

He once claimed his most memorable achievement was probably participating in Ray Digman's hat trick against Southport and Birkdale at Trafalgar Road in 1956 when he caught the first victim, Bill Cotton, down the leg side.

Several of Sefton's players impressed John during their playing days, namely Wilf Johnstone for his extraordinary stamina and whirlwind action and Ted Williams for his durability, eternal youthfulness and fitness that enabled him to continue playing until a year before his death this year at the age of 75.

John is on record as having played one match in Huyton's 1st XI at Birkenhead Park on 17th June 1972 when they were bowled out for 68, with Robbie Overend taking an all bowled 8-32, before going on to lose by six wickets.

He listed 1951 and 1952 as golden years in Sefton's Schoolboy's XI with Noel and Syd Cooke, Ray Digman, John Hobbs (who went on to play for Oxford University and Worcestershire), Cedric Lynch and a chap called Dick Stannard from St Edward's College who scored century after century before joining the Army, never to be heard of again.

John's interests outside the law were many and varied. He wrote and broadcast on Rugby Union Football. Apart from being President of Sefton Park Cricket Club, he was also President of the Athenaeum, Liverpool RUFC and the Bentley Operatic Society. He became a very accomplished and much sought 'after dinner' speaker. In all, he had a long life usefully spent in the service of others.

In 1970, John married Rosalie Tyson and they had two sons, Matthew and Ben.

Our thoughts and condolences go to John's family and Sefton Park Cricket Club at this sad time.