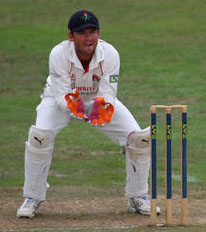 As omens go, it was not particularly encouraging. Dropping your end of season award in front of hundreds of guests is enough to bring a rosy hue to most players’ cheeks. That the player in question is a wicketkeeper and the trophy was made of glass makes it doubly embarrassing.

Gareth Cross' faux pas at Lancashire's awards night may have earned him an unwanted footnote in the coverage of the 2010 season, but he will begin the 2011 campaign as the county's first choice wicketkeeper. Coach Peter Moores confirmed as much as he let his thoughts drift towards next summer, having witnessed this year what he hopes will prove to be a turning point for Cross as a cricketer.

"He'll be number one here next season," Moores stated. "He has waited a long time for his chance and he has worked hard on his game. He has earned his place in the team. He has earned the right to have a good crack."

Few would disagree, not least Cross, who served as understudy to Warren Hegg and Luke Sutton either side of his first team début in 2005. Now 26, he has played just 15 first class games.

Suggestions in the intervening years that Cross would depart Old Trafford - if only on loan - came to nought, and he had long since established himself as Lancashire's premier one day wicketkeeper by the time Sutton left for Derbyshire at the end of the season. With Sutton's departure, Cross' path to a regular spot in the LV= County Championship side is now clear, but that will pose its own problems, according to Moores, himself a former wicketkeeper.

"He's got the challenge next year, which is to keep for a lot of cricket," Moores added. "Keeping wise, it's early days for him, but he's a good keeper."

When Moores describes Cross as an "attacking cricketer", he is referring largely to his batting, which was what first brought him to the attention of the Lancashire fans during his early years with a club he has represented since a teenager. However, Moores saw signs this summer that Cross is developing into a more rounded player, thanks in no small part to the influence of Shivnarine Chanderpaul, Lancashire's overseas player.

"We knew Gareth was a talented batter," said Moores. "But he knew he had to find a tempo for longer formats as well as being able to strike the ball. I think he's finding that."

A key innings came at Canterbury, where Cross contributed 50 to a fifth wicket stand of 89 with Chanderpaul, who spent almost five and half hours crafting a fine 120.

"You watched him bat with Shiv and he got Shiv's rhythm," Moores went on. "He suddenly eased into it, started knocking it around until he got 50. Rather than talking about it, he did it. He took that rhythm into the next game when he wasn’t batting with Shiv. He was still batting with the same tempo that he got with Shiv the game before.

"That, to me, is lovely. That's part of why having very good players around is good for everybody. Gareth is a good influence. He's an attacking batter and has an aggressive mode of play, which is exciting for the club."