Competitive cricket returns to Merseyside this weekend with a host of first and second round ties in the Ray Digman Knockout Trophy.

Highlights include a mouth watering clash between holders New Brighton, who have been drawn at home to seventeen times winners Bootle, while last year’s finalists Leigh entertain Highfield.

Also standing out is the game between old rivals Sefton Park and Birkenhead Park, with Division One Sefton looking to get one over on their Premier League adversaries.

Last season saw Sefton Park narrowly avoid relegation to the Competition’s third tier after a dramatic final day win over Rainford and, while the subsequent celebrations will live long in the memory, skipper Richie Forsyth is determined that the club won’t be in a similar situation come September.

Forsyth has overseen some impressive coups in the transfer market over the winter with much travelled wicketkeeper Mark Wilkie arriving at Croxteth Drive along with returning former captain Adam Irwin whose prolific batting was a highlight of Park's Division Two championship winning season two years ago. 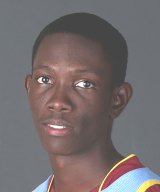 In addition to these new arrivals, Forsyth will once again benefit from the Lancashire Cricket Board's partnership with the Barbados Cricket Association, whose latest starlet, Jonathan Drakes (pictured left), will arrive in South Liverpool in time for Sefton's first home league match against Newton le Willows on April 25th. The 20 year old all rounder, who is the latest recipient of the prestigious Lord Gavron award, has an excellent record in the island's domestic competitions and has represented the West Indies U19 team in the Youth World Cup.

It all helps to bolster Forsyth in the hope that his team will soon be challenging at the other end of what is often the Competition's most closely contested division.

"Last year was quite difficult for me personally because we’d lost five or six players from the side that won promotion from Division Two," he said.

"The main objective was to retain our First Division status, which we did after a great game on the final day of the season. This year the hope is that a relatively young side has learned from the position we got ourselves into last time around. Certainly we’re hoping our season won’t be as dramatic as it was on the final day last year."

The new arrivals are particularly exciting for the Scottish born skipper with the combined experience of Wilkie and Irwin a major positive.

"We've managed to get Mark to keep wicket for us and we’re hoping that his old head might stand us in good stead this year," said Forsyth.

"Adam's work has brought him back to Liverpool and he will make life a lot easier for me in terms of organising practice, for example. He's a good trainer and he’s someone I can rely on for experienced advice.

"The good offices of the LCB's Dave Goodall has brought us Jonathan Drakes from Barbados. He's from the same club as Jason Holder, so he has a decent pedigree."

A long awaited return to the Premier League remains a tantalising target but a realistic one if Forsyth is to be believed.

Added the captain: "Last year's standout sides were Formby and Highfield and they went up. The teams we might have down as the promotion favourites this year are those we competed with and beat last year.

"I think most captains would say that Division One was very open. A club like Sefton Park should be targeting the Premier League and that's in our mandate."