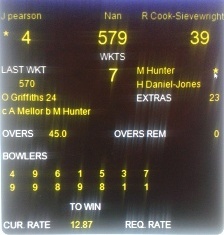 Caldy visited Nantwich today in the Royal London Club Championship knowing they would have a battle on their hands against the Cheshire County Premier League side.

Battle wasn't the word as Nantwich scored runs for fun in the Cheshire sunshine whilst statisticians searched through record books.

They lost an early wicket at 13 and that was when Lancashire hopeful, 21 year old Liam Livingstone joined Ryan Brown at the crease. The pair added 190 in 15 overs before opener Brown fell for 66 at 203-2 after 17.1 overs. Livingstone's share in the partnership being 126.

Ben Johnston joined the centurion and the innings gathered pace with the total going through 300 and then 400 with Livingstone passing his 200 and 300.

Livingstone's amazing innings spanned 35 overs, was from 138 balls and included 34x4s and 27x6s.

Nantwich marched onwards and their innings eventually closed on 579-7 with three of Caldy's bowlers reaching centuries. The twenty-six overs bowled between them yielded 354 runs.

Nantwich's total was the highest ever in a 45 over cup match, the fifth highest in the world in minor limited overs matches and the second highest in the UK.

Livingstone's innings is listed on Cricinfo as the fourth highest in the world in minor limited overs matches. The highest known score is by Sankruth Sriram who scored 486* for JSS International School U16 v Hebron School U16 at Ootacamund in a 40 over match in the Nigris DCA U16 inter school cricket tournament in September 2014. His side totalled 605-0 and bowled out Hebron for 42.

The list of 'minor limited over cricket matches' does not differentiate between types of limited over matches.

Yesterday, Colwyn Bay had to pass Formby on their way to Fleetwood Hesketh but today they called into Cricket Path and completed a successful weekend with a win by 36 runs. Zak Gidlow set the Bay on their way to 336-6 with 151 from 125 balls with 22x4s and 4x6s and he added 182 for the second wicket with Jordan Evans (62).

Colwyn Bay's prize for winning is a trip to, you've guessed it, Nantwich.

Leigh are out of the competition after losing by 43 runs at Littleborough. The home side posted 231-4 with former Lancastrian Chris Schofield (92) and Mohammed Khan (77) adding 127 for the third wicket.