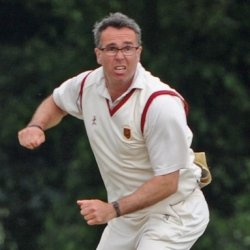 Having taken the first nine wickets to fall, Birkenhead Park's Rob Houghton (pictured left) was beginning to celebrate a magnificent 10 when Southport and Birkdale's number eleven batsman, Andy Warhurst, hit the ball in the direction of Chris Davies. However, joy turned to anguish as the Park skipper dropped the catch. What made things worse was that Ian Daniel nipped in to take the tenth wicket to leave Houghton with 9-49 and the Sandgrounders 176 all out. Park slumped to 21-2 but Daniel (67) and Luke Camden (40*) took them to a win by 6 wickets.  scorecard

NOTE: Houghton's 9-49 beat his previous best 8-73 against Newton le Willows in 2013. The nine wickets doubled his tally for the season and puts him on to 950 1st XI Liverpool Competition league wickets since making his début with Sefton in 1990. The last English player to take ten wickets in an innings was Bootle's Dick Carr, who took 10-66 at Birkenhead Park in 1991. Park legend Tony Shillinglaw took 10-28 at Neston in 1973.

Rake Lane was one of the three grounds that witnessed the side batting first being dismissed for less than 100. The match between New Brighton and Ormskirk was listed as match of the day. Ormskirk reached 69-2 after winning the toss but collapsed to 97 all out with Ashraf Nawab taking 3-26 and Andy Clarke 3-41. New Brighton then coasted to a win by seven wickets as the two teams exchanged places at the top of the table.  scorecard

Formby climbed into third place after beating former champions, Lytham, at Cricket Path, Alex Lines (5-46) took the first five Lytham wickets before Gary Keedy cleaned up with 4-6 from six overs to leave the Fylde side 111 all out with Will Hale hitting 40. Whilst Alex and Keedy had lined up the medicine, it was down to the doctor to provide the tonic. Jude Mahadanaarachchi hit an unbeaten 85 from 70 balls with 15x4s and 1x6 and added an unbroken 114 with Patrick Pisel (21) to take Formby home by ten wickets.  scorecard

An interesting match was on the cards at Moor Park where Northern met old rivals, Bootle. Whilst first innings wickets were tumbling elsewhere, Northern lost five whilst reaching 209 with Stephen Lucas hitting 53. Davy Smith (48) and James Cole (49) narrowly missed their fifties. Ryan Maddock was Northern's ace in the pack as he took a personal best 5-35 as Bootle folded to 108 all out.  scorecard

Leigh's Richard Dempster (6-30) and Hedley Molyneux (3-32) played havoc with the Rainhill batsmen at Beech Walk as they were dismissed for 72 in 30,2 overs. Mohammad Aslam then took 4-10 as Leigh reached 73-5.  scorecard

It was a case of 'it's not over until it's over' at Billinge Road where Highfield bowled out Wallasey for 75 with Rob Halliwell taking 5-12 and Chris Liptrot, 4-33. Maybe thinking the points were in the bag, Highfield collapsed to 58 all out with Lahiru Lakmal taking 3-14 and Chris Bourne, 6-33 to leave him on 398 ECB Premier League wickets, 545 in all 1st XI league matches since making his début in 1996.  scorecard