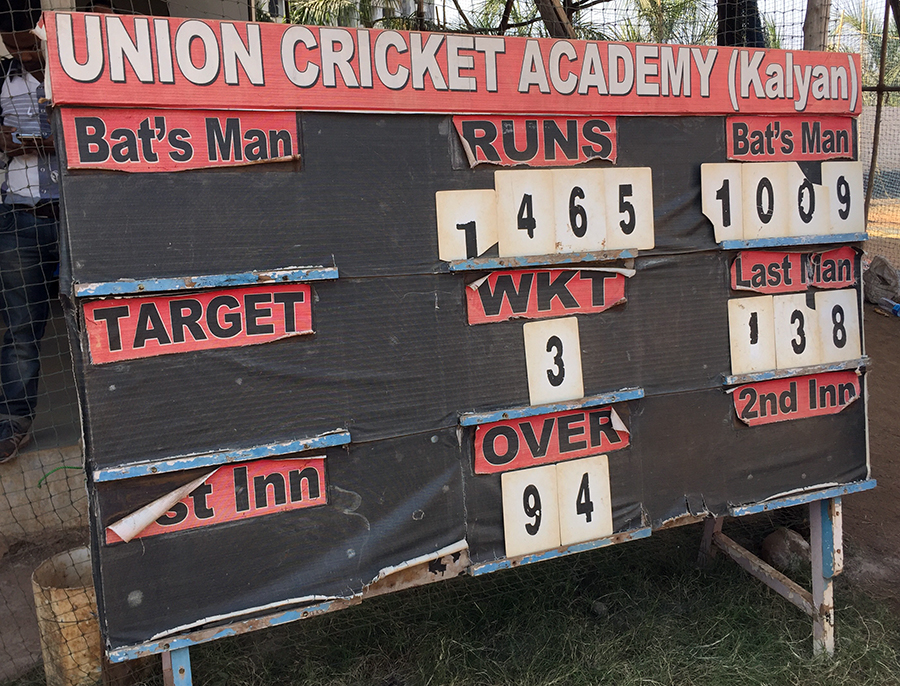 After breaking one of cricket's oldest records by smashing 652 not out yesterday, Indian schoolboy Pranav Dhanawade went on to score more than 1,000 runs in an incredible innings.

The 15 year old, who was representing KT Gandhi School in the HT Bhandari Cup in Mumbai, beat the long standing batting record of 628 not out set by AEJ Collins in a school match at Clifton College in 1899.

Dhanawade resumed today and eventually reached a monumental score of 1009 not out in 94 overs before his side declared on 1465-3 in what is believed to be the highest individual score in any recorded match in history.

At the end of the first day of this two day match, Dhanawade admitted he was targeting a four figure total. "Why not? I am confident that I can do it," Pranav said. "I will definitely try to score 1,000 runs as I am just 350 away. If I can score 600 runs in two sessions, I am confident of scoring 350 in one session."

Dhanawade, the son of a rickshaw driver, achieved the remarkable feat in just 323 balls, bludgeoning 59 sixes and 129 fours with a strike rate of 312.38.

After resuming on 652, Dhanawade picked up where he left off and made light work of the Arya Gurukul School's bowling attack in the morning as he reached 921 at lunch.

If he was nervous closing in on the 1000 mark, Dhanawade didn't show it before the stunning knock was brought to an end with the declaration.

KT Gandhi School had earlier skittled Arya Gurukul for just 31 before making equally light work in the second innings bowling them out for 52 to win by an innings and 1382 runs.

"My teachers have helped me a lot and now I want to play the Ranji Trophy." Dhanawade said. "I have always been a big hitter. When I started I never thought about breaking the record. The focus was never that I just played my natural game which is to attack from the word go."

Indian cricket legend Sachin Tendulkar, who is the highest ever run scorer in Test cricket with 15921, congratulated Dhanawade on his brilliant innings.

'Congrats #PranavDhanawade on being the first ever to score 1000 runs in an innings. Well done and work hard. You need to scale new peaks!' Tendulkar tweeted.

After hearing of his son's exploits, Dhanawade's father made his way to the ground to watch the incredible display.

"I reached there as he was just reaching the milestone of 300." Prashant Dhanawade said. "I was nervous throughout, but was just happy to see my son batting. Today, he was determined to get to 1000 and he did that in quick time, taking less than two sessions to score more than 350 runs."

"My teachers have helped me a lot and now I want to play the Ranji Trophy," Dhanawade said after his record breaking innings.

"I have always been a big hitter. When I started I never thought about breaking the record. The focus was never that I just played my natural game which is to attack from the word go."

Dhanawade's father Prashant is a proud man after his son scaled unbelievable peaks. "I want my son to become a great cricketer. He has proved that he has the talent today.

"Cricket is not an easy sport and expensive too. I spent extra hours driving an auto rickshaw in order to afford the cricket gear for my son," he said. However, Prashant can rest easy now. With his son achieving overnight fame, the Maharashtra government has decided to bear Pranav's coaching and education expenses.

Whilst the world's attention was on Dhanawade, mention must be made of his team's captain and opening bowler Aayush Kamath, who clinched 8-16 including a hat trick in Arya Gurukul's second innings.