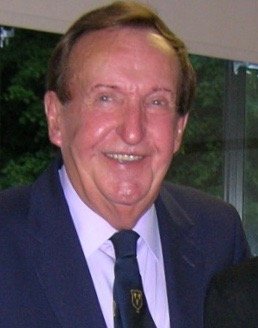 The death was announced on Monday February 19th of Roger Maddock Cash, aged 86.

Originally from Capenhurst, Roger attended King's School, Chester where he met the late Phil Campey and Colin Stockton. Their friendship led him to Chester Boughton Hall Cricket Club where he played occasionally for the 2nd XI whilst still at school in the 1940s. He later represented and captained Capenhurst.

Although no more than a modest player himself, Roger had a great love of sport, particularly tennis and cricket and was proud to eventually become an MCC member. He was also a keen supporter of Lancashire CCC.

An exceptional badminton player, Roger was President of the Cheshire County Badminton Association for many years.

Many of Roger's friends were Chester Boughton Hall members and during the 1980s he was regularly to be found at the club on summer Saturdays.

An invitation to become more involved in the running of the club followed and, having sold his loss adjustment business and moved to Mollington, Roger took on the role of secretary for both the cricket club and the limited company.

Eager to increase the club's profile, Roger was a driving force in bringing Cheshire's Gillette Cup and later, Nat West Trophy matches to the ground, personally providing the requisite financial guarantees. Such personal generosity was also shown in his contributions to purchase new ground equipment, his repayment for which was literally, peanuts, which he consumed with regularity when at the bar.

Roger continued to work on the club's management committee and the board of directors throughout the hectic period of the building of the new pavilion, relinquishing only when the work was completed in 2001. Thereafter he remained a loyal and constant supporter, following the cricket teams home and away.

He will be greatly missed.

Family flowers only but donations may be made in aid of Holy Trinity Church and the Hospice of the Good Shepherd, Backford.