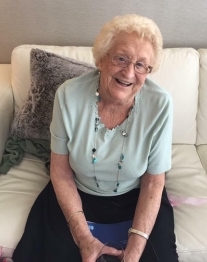 It is with great sadness that I announce the passing of our Club President Eileen Gaskell at the age of 88 years.

Eileen was made Highfield Cricket Club's first female honorary life member in 1993, in recognition of her overall contribution to the club over many years including being a scorer, as was her late daughter Jane. Eileen then succeeded her husband Harold as President, ahead of the 2005 season.

Of course, Eileen's contribution to the community wasn't restricted to the cricket club. I am indebted to Dave Whitter and Sheila Highton for the more detailed information presented here, which will form part of a wider piece on Eileen and her life in a future Parish Magazine.

Eileen, born and bred in Highfield, was a lifelong member of St. Matthew’s Church, following in the footsteps of her family and singing in the church choir with many of them.

Eileen attended St. Matthew’s School up to the age of 11, before moving on to Wigan Girls’ High School. She studied to get her teaching qualifications and finally returned to St Mathews in 1969 as the Deputy Head Teacher, becoming Head in 1983.

In her time, Eileen was responsible for founding the PTFA, which will be 50 years old in 2019. She was also instrumental in starting the Beetle Drive which is still running and raising money for the school.

Eileen also took over the responsibilities for catering in the Parish Hall. Along with a small group of ladies, they catered for all Parish functions, including three course roast dinners for 100+ people at Cricket Club Sportsmens’ Dinners,  as well as weddings etc.

Her advancing years didn't stop her from continuing to support the parish and cricket club. Indeed Eileen was a constant presence at home games, both senior and junior games, and was not afraid to make her views known. She cared passionately about the cricket club and our teams.

As Club President she still attended the annual presentation events which made it extra special for the recipients of the awards.

Eileen remained the figurehead of the Gaskell family who continue to offer so much support to our club. Eileen sons Martin and Cameron work on the ground (and so much more), grandson Philip is the Treasurer and great grandson Elliott a junior wicket-keeper batsman like his grandad Cameron and legendary great-grandad Harold.

Eileen was a great character and we will miss her terribly, as will her community. I had the privilege of speaking at Harold's funeral and some of the words I used then would apply to Eileen. Their contribution to the Highfield community was selfless and sustained.

I'm sure the Gaskell family would love to read your comments about Eileen and her life. If you prefer you can message the club privately and we will pass the message on.

On behalf of the club, I will simply say thank you Eileen and God bless.