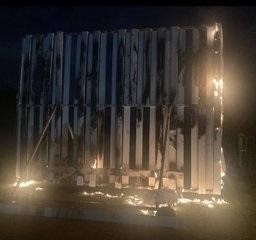 Vandals targeted a Wirral cricket club on Saturday evening with police officers confirming that a group of youths set a sightscreen on fire.

Emergency services were called at around 8:35pm following reports that the structure had been set alight by the youths who then managed to escape from members at the club.

Merseyside Fire and Rescue Service (MFRS) attended and extinguished the fire and the area was searched for the offenders.

Patrols remained in the area in the evening and enquiries are ongoing to trace those responsible.

"It has been difficult enough for our local organisations to get back to normality in recent months, and the club now faces further stress, inconvenience and costs.

"We're keen to speak to anyone who knows who may have been responsible, plus those in the area who may have seen or captured images of a group of youths on Saturday evening. We will take action on all information provided so please come forward."